We are changing the times of the Saturday class to help give more of the day, and avoid excessive sun and heat during summer. New class time is 9-11am 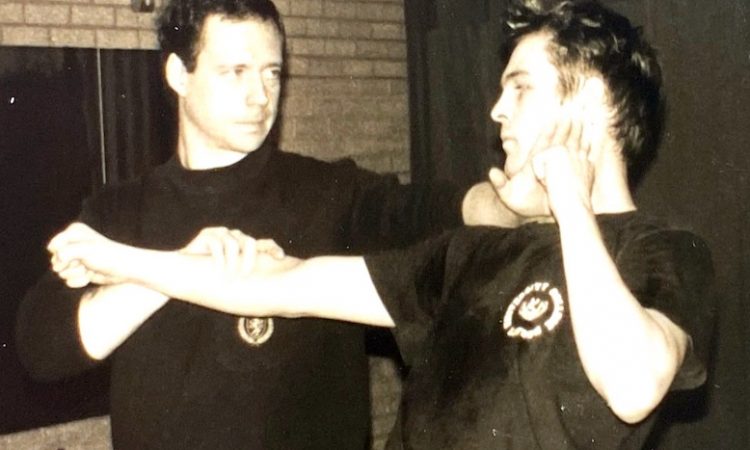 I first met Dan Docherty in 1989 at Jubilee Hall in Covent Garden. I’d phoned him beforehand, explaining I had learned from Ian McMillan, one of Dan’s early students, in Brighton. It was a bit intimidating – Dan’s reputation preceded him, especially since he’d told “McMillan” to stop teaching, due to a health issue from a woman he’d treated with his apparently limited skills in TCM. Dan was an impressive figure, but also quite kind and welcoming, with a twinkle in his eye and would never beat around the bush. It would have been around Christmas of that year that he mentioned a few people would go for a drink after the class, and over a beer I foolishly asked him which other martial arts had caused him the most problems when fighting. His response was blunt – “what problems?” This Q&A style is perhaps what I remember most about Dan the teacher – moving before the opponent, destroying the premise of the question before it is even asked, giving rapid, decisive one word or one line answers. Why should we do competitions? someone asked. “Experience” was the answer one time, “medals” on another occasion.

After only two years training in London – but going to most classes that I could (Mon, Weds, Fri, then Saturday down in Tufnell Park/Finsbury) – I decided to go and live in France, and asked Dan if I might teach. He was massively supportive, getting me my first teacher certificate (signed by Gary Wragg of Wu family Tai Chi – the TCUGB was in its infancy), and getting me set up with some photos – he provided me prints, with notes on the back, of various things including, of course, his triumphant victor’s pose over an unconscious Roy Pink from Wu Tzu Chuan. It was inspiring, and although I was unhappy about stopping classes, it was a great adventure to setup the “Wudang France” organisation. Some of the early students are still training and teaching, “malgre tout”. As chance and serendipity would have it, I started teaching at the “Dojo de la Montagne” – Henri Plee’s establishment (Plee was an early pioneer of Japanese martial arts in France). I didn’t know when I started, but this was the same dojo where Dan had learnt from Yoshinao Nanbu (who died last year, 10 years older than Dan). Nanbu was still teaching back in those days – his own style (well, his second): Nanbudo, and had the class before mine on Saturday afternoons. I was proud to host Dan in the very same dojo for his first French seminar. I got him a rather second rate hotel room, and a bottle of Jameson’s. We sat in that room, trying to converse, and for every sip of whisky I took, he would down a glass, then pour us both another. Kamal had become a semi-professional Vale Tudo fighter … “it was something he wanted to do”. I rarely found a way to talk with Dan as a human, although as a teacher he lectured, commented, answered questions, and I listened and learned volumes. That evening, the conversation didn’t last long, nor did the bottle.

The French period was filled with ups and downs, schisms, love and hatred, misunderstandings, polemic and interpersonal cold wars. The back-biting was unbelievable. I invested a lot in all of it, good and bad, and Dan was always there to support whatever we were doing. He never stopped teaching, never stopped travelling to teach, never didn’t teach. I ran a sort of shop with the French, getting videos and T-shirts from Dan, selling them to the students and giving him the proceeds when he came over for a seminar. I was never any good with money, made many mistakes (some huge) – but he was always tolerant of these faults. When I was at rock bottom, he told me “if you don’t have any money I can’t charge you” – so I would humbly accept free teaching from this renowned master. This period also marked huge changes in his life, to which some of us bore witness, to some things. Rencontres Jasnieres in the late nineties and early naughties was a fraught place to be, but also full of learning. That teaching, the mastery, the insights – that never stopped, despite everything that was going on. He got me to organise a barbeque to bring people together. He asked me to drive a couple of people around, like a chauffeur. I was proud to be chosen for such tasks.

I’ve been to various workshops with different people at different times, have done tiny bits of Karate and Judo, and once started learning Wing Chun (but it was too similar) … but at the end of the day Dan Docherty was always my teacher, and the North Star of Tai Chi Chuan as far as I’m concerned. It was impossible to get everything that he knew and taught, and most of us anyway are not full time practitioners nor make the kind of sacrifices Dan made. We all have to own our personal journey in Tai Chi Chuan of course, and what I practice and teach is not 100% identical to my teacher’s transmission. However, I always made an effort to try and follow in the footsteps of the master, as best I could (arguably not very well, I know). I would like to think Dan knew that and supported it, despite our differences.

The last time I saw Dan, he didn’t recognise me – it had been a couple of years, and I had put on a few kilos. Despite me enlisting for the workshop in “Docherty towers”, he’d evidently not clicked. He welcomed me into his home, provided tea and dates, told us stories and gave us sometimes complex sword techniques to work with – in the living room. He remembered that I too had a daughter, and gave this as an example of how Tai Chi energetics help with fertility. I was looking forward to repeating the visit – London is far from Devon and on the other side of the world from Australia.

“Some people have ‘Master’ emblazoned on their T-shirts!” he noted when I asked, at the start, what I should call him – Sifu? He was just Dan. He could throw water over anyone to show them up, and there was no light-hearted hopping when he applied techniques. Shock, pain and relief that he didn’t go that extra inch. He did two seminars down under here in Melbourne, and people here remember him well. For getting thrown into walls, that sort of thing. Dan was full of great stories – how he pulled apart the shoulder of a cynical attendee (who was a big guy – played American football), because he doubted that drape body was an effective technique. Dan showed him he was wrong. “I don’t like Australians” he told me when I moved here. Such dislikes never stopped him from teaching them, or anyone else.

So now the story is over. Farewell Dan. It was sudden and seems so unfair. Needless to say his memory will live on, and his teaching and practice, through the wide Tai Chi family that he created – Practical Tai Chi Chuan International. I’m proud to have known him, to have been his student, and to continue his legacy, as best I can and in my own way. Like so many others he taught, he has made a deep impression on my life.

(This article is the flip-side of a separate article – Gong: work and effort– both should be read in conjunction) I’ve always considered myself quite ‘spiritual’. I’ve twice thought seriously about becoming a monk, and got my first book on black magic at the tender age of 10. One thing …

(This article is the flip-side of a separate article – https://www.changeskill.com/2020/07/27/spirituality/ – both should be read in conjunction) As a Tai Chi teacher, I’ve gone through different phases. At first, it was just trying to do what my teacher taught and told me. Like a lot of people, I started …

Working my way through the Australian Kungfu Federation’s coaching accreditation, I was reminded of that good old sports science equation: Strength + Speed = Power From the point of view of Tai Chi Chuan, this presents some points of interest. In the Classics, reference is made to “Li” (strength) and “Jin” …

Change Skill school of Practical Tai Chi Chuan provides a separate, opt-in workstream for fight training. It is typically embedded in regular classes, for those who wish to work on this, and open to anyone whether or not they are studying the style. Most Tai Chi practitioners do not actually …

In Thai “Jing jing” means “really true”, so for example “Aroy jing jing” means “that really is delicious!”. The Tai Chi Newbie may jar a little when they are told that Gin is at the heart of Chinese internal martial arts. Others, typically with some background in Qigong, might say …

Tai Chi Chuan is a Chinese internal martial art, listed as part of the ‘Nei jia quan‘ (‘Internal family boxing’). As such it contrasts with external martial arts (‘Wai jia quan’, where ‘Wai’ translates as ‘External’). The distinction may be traced back to the 17th century, although my teacher points …

One of Tai Chi’s most touted health benefits relates to spinal health. The two pictures here, illustrate the point very well (from Peter Payne’s book ‘Martial Arts – The Spiritual Dimension’). All Tai Chi styles invoke their practitioners to maintain a straight back – “no bumps, no hollows”. Some schools …